Talk with your hands, face and whole body

# 1: Is there only one single sign language in the world?

No, many sign languages ​​are used - there are a total of 137 worldwide, says the specialist journal “Ethnologue”.

As in spoken language, there are also several dialects in sign languages. In the German Sign Language (DGS), for example, colors and days of the week are shown with slightly different hand signals depending on the region.

# 2: How many people are deaf and use sign language?

Around 0.1 percent of the total population in Germany are deaf, says the German Deaf Association. That corresponds to around 83,000 people. There are around 70 million worldwide. German sign language is used by around 200,000 to 300,000 people in Germany either constantly or occasionally.

Not all deaf people have learned a sign language and use it to communicate. Conversely, not all people who use a sign language are deaf, because hearing relatives and friends are often also able to speak this form of language - and of course interpreters.

# 3: When someone learns a foreign sign language, does he or she have an accent?

Yes, when deaf people learn a foreign sign language and use it, native speakers can sometimes tell - for example when foreign speakers use certain hand shapes from their own mother tongue. As in spoken languages, this creates an accent: you are understood, but the other person can see that communication is not in your mother tongue.

No, hand shapes and movements are a very important part of sign languages, but they also consist of facial expressions, posture and words spoken silently. For example, facial expressions are used to express feelings and show whether you like something or whether you find something exciting or boring. It can be just as important where and how the gestures are performed - for example close to the body or with an outstretched arm a little in front of it. The same hand movement can then mean a different word.

With some signs, even people who don't speak the language themselves can guess what the conversation is about: around a third of the signs are “iconic”. Some gestures therefore depict their meaning directly, such as the sign for “baby”. You move your arms back and forth in front of your body as if you were cradling a small child. Signs are mostly abstract, so the appearance of the gestures has nothing to do with their meaning. Therefore, as a newcomer, you have to learn most of the signs and vocabulary.

# 5: In addition to the sign languages, there is a so-called finger alphabet. What is it and how is it used?

The finger alphabet complements the sign language and is used to spell words. For each letter of the written alphabet there is a symbol that is represented by hand. These characters are used, for example, to spell names or terms for which there are (yet) no signs.

Sometimes sign speakers spell individual words even if there is already a sign for them. You do this when you want to emphasize a word or a term.

In Germany, German Sign Language has been officially recognized as an independent language since 2002. Since then, deaf and hard of hearing people have had certain rights that they did not have before. For example, they have to be provided with a sign language interpreter at court appointments.

# 7: Does German Sign Language have the same grammar as spoken or written German?

No, German sign language has its own grammar. For example, sentences are structured very differently than in spoken language: In sign language, time information such as “today” or “tomorrow” is always at the beginning of the sentence, followed by location information. Question words like “why” or “what” are always at the end. A question such as “will you go to the café with me?” Is also signed in the same way as the statement “you will go to the café with me”. The other person can only tell that a question is being asked by the facial expression of the person who is formulating it - the facial expression is the question mark.

People who are deaf from birth and have learned German sign language as their mother tongue must learn German written language like a new foreign language. This is often not easy, because the written language represents the spoken language. From birth, deaf people do not know the sounds on which the letters and words are based.

Many adult education centers in Germany offer appropriate language courses. In addition, there are also some sign language schools and associations where you can learn the DGS - the German Deaf Association has compiled a list of providers on its website.

You can also familiarize yourself with the DGS on the Internet, for example with the illustrated DGS taster course by hearing journalist Olaf Fritsche and his sign language teacher Claudia Rüger. On the “Learn Signs” website you will also find a comprehensive dictionary with videos that you can copy and a basic course especially for people who work as nurses or doctors.

Deaf is not deaf and dumb!

Deaf people are still often referred to as "deaf and dumb" in everyday life and in many media. This designation is wrong for several reasons. Blogger Julia Probst explains why in an article for the portal Leidmedien.de: Deaf people are deaf, but most of them are physically able to communicate with spoken language. In addition, nobody is “mute” even if he or she does not have a physical voice (any more): Deaf people can express, describe and discuss topics just as much with gestures as hearing people do with spoken language. 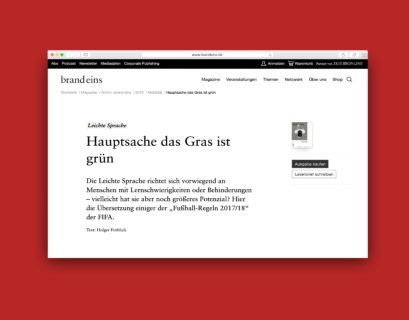 "All footballs have to be round"

Our find of the week is the “Easy Language” section in brand eins magazine. Every month the author translates a legal text, advertising or the FIFA soccer rules into plain language. That is very revealing - and mostly very funny too. 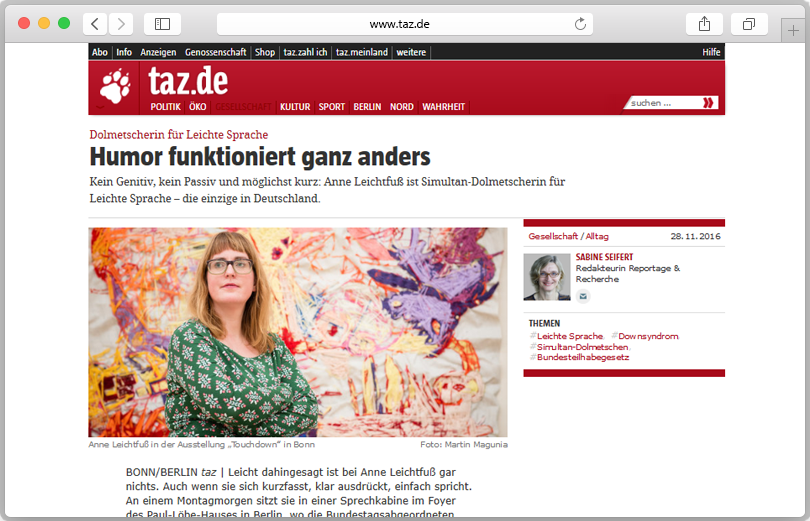 Avoid short sentences, passive, genitive and subjunctive, insert many paragraphs: these are, roughly summarized, the rules of easy language. This variation of German is intended to simplify the complex grammar of German so much that everyone can understand the content of a text well - including those who ...