What causes traffic jams in Bangladesh

They are young, well educated and want to change something: The members of the BDCyclists group want to popularize cycling in Dhaka, the capital of Bangladesh. Founded three years ago on the social network facebook, the group now has more than 38,000 members - with many smaller subgroups. The Bangladeshi Cyclists, as they call themselves, are incredibly active as pioneers. "We cycle our daily routes and organize critical mass tours every month," says Fuad. The 30-year-old graphic artist moderates the group and explains that several hundred bicycle enthusiasts regularly take part. In addition, the BDCyclists organize bike tours, offer courses and training for beginners and go on weekend bike trips to the surrounding area of ​​the 15 million-inhabitant megacity. 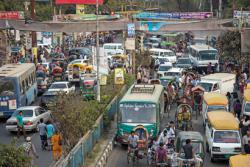 The daily traffic chaos on the streets of Dhaka. Photo: Uta Linnert

Because the traffic chaos on the streets of the Bangladeshi capital is incomprehensible to European eyes. Three-wheeled motorcycle taxis are parked on Mirpur Road, one of Dhaka's main thoroughfares, wedged between hopelessly overcrowded buses. Cars fight their way forward centimeter by inch, from all sides others try to thread their way into the street. Rusty trucks push rickshaw drivers out of the way, whose occupants stoically endure the standstill. Pedestrians run in between. In the midst of the commotion, a policeman, rowing his arms wildly, is standing on a losing post. "Now you know why we are cyclists," shouts Mahmud. "With the bike we are free - and simply faster." The bus used to take him over an hour to get to the office a few kilometers from home. The young bank manager cycles the distance in twenty minutes.

With pride and pleasure

For today, Ridwan, a civil engineer, and his friend Arif, who runs a bike shop in the old town, have launched the "Welcome to Bangladesh" after-work tour and put it online. Around 25 members of the Mohammadpur Cyclists Facebook group spontaneously responded to the call and appear at the British Council meeting point at 7 p.m. to greet the guests from Germany. All are between 20 and 35 years old: Mahmud comes in a suit straight from the job at the bank. Shafaiyat runs an internet company and is a photographer. Abdullah works in film, Shariar is a journalist, Omar studied architecture and Sohel introduces himself as a bike doctor. Rahul has just finished his pharmacy studies. They are happy that there is also a woman: the art student Bithi. In Bangladesh's Muslim society, the bicycle fever has not yet affected girls as much as it does young men. Everyone wears helmets and looks at their chic bikes with pride and great pleasure, mostly models of American or European origin. To prove that you can actually ride a bike in the chaos of this congested city, they have brought bicycles and helmets for visitors.

In the comparatively quiet university district, only a few cars are allowed to drive through the tree-lined streets. Rickshaws dominate, with most students walking. The group drives quickly and is well established. "Caution! Breaker!" They call to themselves when every few hundred meters an angular threshold in the ground rudely slows down the speed. Everyone rides mountain bikes, even though the city is just a few meters above sea level. "This is off-road," says Bithi and laughs, "we have to be able to drive over sand, through potholes, over patched asphalt and steps."

In Mirpur Road, the group is met by the unbelievable din of horns, bells and screams. From the scaffolding of the gigantic construction sites along the north-south axis of the city, where blocks of houses rise up to the left and right, hammering and drilling mix with the traffic noise. It's hot, dusty and smells like burning garbage. Despite all the movement: It can't be healthy here. "Of course, we cyclists inhale all the dirt," says Ali, who has already explored all the provinces of Bangladesh by bike. "The soot from the trucks also finds those who are stuck in the bus," he says. "Everyone who rides a bike helps make it better." 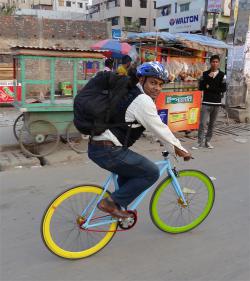 On the bike past the traffic jam

The cyclists fight with everyone else for the little space, meandering where they can, past the traffic jam. There are of course no bike paths. If it gets too tight, they jump off, shoulder the bike and walk a bit above the curb on uneven terrain between pedestrians and parked rubbish. But as soon as the traffic jam at the intersection is over, they play their advantage: "Go, go, go", everyone cheers on each other. The joy of the free stretch of road is enormous.

Dhaka is one of the fastest growing metropolises in the world. 15 million people live in a confined space and it is said that around 1,400 people are added every day. They leave their villages and settle somewhere in the city because the country's factories and jobs are concentrated in the capital. In the next decade, the megacity's population could have grown to 20 million. The infrastructure is already hopelessly overwhelmed.

"The terrible traffic and the clogged streets at all times of the day are one of the biggest obstacles for Bangladesh to develop," believes Ekram Ullah, who is also testing cycling today. Usually the 50-year-old businessman is on the road with a car and driver. "I spend endless hours a day driving my car, I'm trapped in the back of the car and can't tell when I'll be arriving. Many appointments are missed because everyone is late, you can't plan anything, you are helpless at this standstill," he complains. The entrepreneur, who has been commuting between Bangladesh and Germany for many years, considered cycling in his hometown to be impossible. He has not ridden a bicycle in Dhaka since he was a child.

"We don't want to leave the city to the car-owning class," says the BDCyclists' homepage. And: "We show people that a bicycle is completely sufficient for their daily mobility." "If there were safe routes, the bike would be a perfect and inexpensive means of transport for most of the population," says Fuad, a representative of the young cycling movement. The Minister of Transport is now in talks. 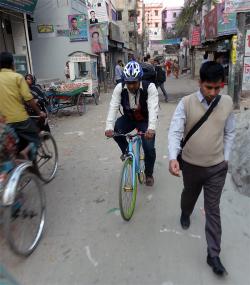 It is usually much faster by bike than by motorized means of transport. Photo: Carmen Brandt

But the BDCyclists cannot and do not want to wait for new infrastructure. They have started organizing information afternoons for seamstresses in textile factories. "The other day a grocery manufacturer financed a meal and we were able to show bicycles and offered test rides," says bicycle dealer Arif. Some of the women would have signed up for a free cycling course afterwards - because the lessons, like everything the BDCyclists organize, are voluntary.

You have a mission

With all this, the new cyclists don't care much about social conventions. "We have left behind the image of the bicycle as a means of transport for poor people," says Fuad. On the contrary: it is comparatively well-off young people who determine the new trend, who quite consciously do not buy a car, but a good bike. With their presence on the streets, they proudly show how important the newly discovered mobility is to them.

Some employers have also got it. The first companies, banks and telecommunications companies have started to set up bicycle parking spaces, "says Mahmud." It's good advertising when my colleagues see me on my bike. I've already infected some of them and they're following my example, "says the young bank manager, whose boss allows him to park his high-tech bike next to his desk.

For Ridwan and Arid, the initiators of today's bike tour, the most important thing is community. On facebook they invite themselves to tours, give tips, discuss goals, upload pictures and videos. "I've been a happy person since I discovered cycling. It has changed my life," says the young civil engineer with a smile on his face. Many social ties were created through cycling. "In our society there is little compensation for work. We hung out on the weekends, now we ride our bikes," he says.

Poster for the photo exhibition of the same name: For three years now, cyclists in Dhaka have been driving for the traffic turnaround. Photo: BDCyclists

"3 years of a change" is the motto of their poster for the photo exhibition, with which the cyclists confidently show that they have been on the way to turning Dhaka into a bicycle city for three years. "We are getting closer to this goal," says Fuad.

At the beginning the first cyclists were laughed at, "now we are 38,000 and are slowly being taken seriously. When we are 500,000, politics can no longer get past us," he says. On the country's national holiday in mid-December, 4,500 cyclists in the national colors cycled through the city together. Also on Independence Day in March they drove in a mile-long association and showed the people and the city how many they are already and how much fun cycling is. This is how advertising for change works.