For weeks I didn't believe that my planned trip to the Canary Islands on the northwest coast of Africa would be possible. Vacation seemed unthinkable in the last six months in Berlin, where my range of motion was limited to visits to the supermarket and long walks.

When I started my trip, Europeans only had to show a negative PCR test to get to Spain. Other countries in Europe such as Greece or Italy, which are popular with sun-hungry holidaymakers, however, demanded a quarantine of several days. A strong argument in my choice of travel destination.

With our negative PCR test results and full of relief that we could really fly, I drove to BER Airport with my best friend - on the Easter weekend when everything is usually completely overcrowded. But this year there was a yawning emptiness at the gates. 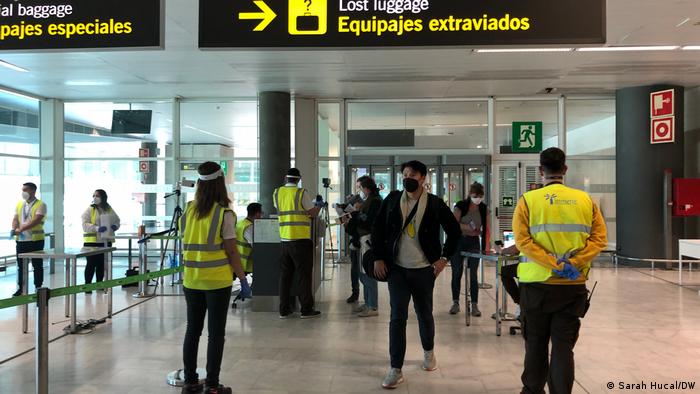 The Canary Islands are classified as a corona risk area by the Robert Koch Institute, but with an average incidence value of 64, they are less affected by the pandemic than Germany. La Gomera is currently considered free of corona, La Palma has an incidence of ten.

Before the pandemic, the Canary Islands were one of the most popular travel destinations in Europe. According to the latest statistics from the Canary Islands Tourist Office, the number of tourists fell by 91 percent in 2021. This is particularly tough for the region, as income from tourism accounts for more than 30 percent of the gross domestic product, just like in the Balearic Islands.

We didn't notice on our flight that fewer tourists than usual made their way to the Canary Islands at Easter. Easyjet squeezed us all into it. I didn't really feel at ease with the long queue of toilets that formed next to me. This feeling was reinforced by the children who paced up and down the corridor and, with their laughter, spread droplets of saliva in the air. I felt completely insecure when I ate a slice of pizza I had brought with me - the airline no longer serves food and drinks for reasons of hygiene, but the passengers can eat their own meals. I kept disinfecting my hands during the flight.

Anyone who travels despite the pandemic has to be spontaneous

Perhaps unsurprisingly, traveling during a pandemic is not for long-term planners. So it made little sense for us to book our accommodation or a car more than a few days in advance: There would have been no refund if our flights were canceled or new travel restrictions were suddenly imposed. Because not all companies have adapted their cancellation conditions to the new circumstances. And yet: We made it to Fuerteventura - an island 100 kilometers from the north coast of Africa, which is known for its beaches and popular with surfers and other water sports enthusiasts from all over Europe.

After standing in line and showing our digital registration form, we picked up our rental car. The steering wheel was wrapped in plastic several times to make sure it was virus-free.

It felt surreal to suddenly stand next to the azure blue water with its colorful fish. My first impression of the coastal town of Corralejo was that we had arrived in an almost COVID-free world. But unfortunately that wasn't entirely true: During our stay there were 189 active cases on the island of Fuerteventura. And of course, disinfectants and FFP2 masks were ubiquitous. In Spain you have to wear a mask outdoors and this rule was observed almost everywhere we were. 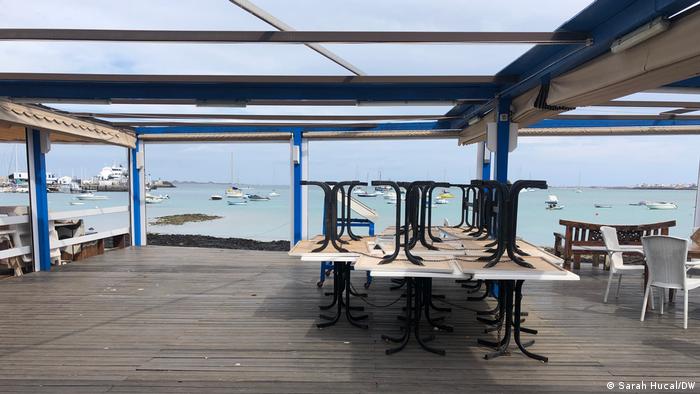 Many restaurants and bars were closed in Corralejo city

An unusually early dinner in Spain

Each island has its own corona requirements, which correspond to the respective "alert level". A distinction is made from 1 to 5 - with 5 being the highest alarm level. Fuerteventura had just been upgraded to level 3 when we arrived. This meant that the outside areas of bars and restaurants were only open until 10 p.m. - at level 2, in which the island is now again, the curfew does not start until 11 p.m.

While many of the shops and restaurants we passed on our drive through the island's smaller villages were closed, the town of Corralejo came alive in the evening and the bars and restaurants filled with young people from all over Europe. After months of restricting contacts, it was exciting and at the same time nerve-wracking to be around people again and to order a drink at a bar, since bars and restaurants in Berlin have only been able to offer take-away food and drinks since November. It almost feels like the "old days", I thought - until a waitress came over and sprayed disinfectant into our hands faster than we could say "Hola".

Around 9:30 p.m. the restaurants emptied. For my Spanish friend it was an unfamiliar picture of people rushing to get home at a time when Spaniards normally only sit down for dinner. 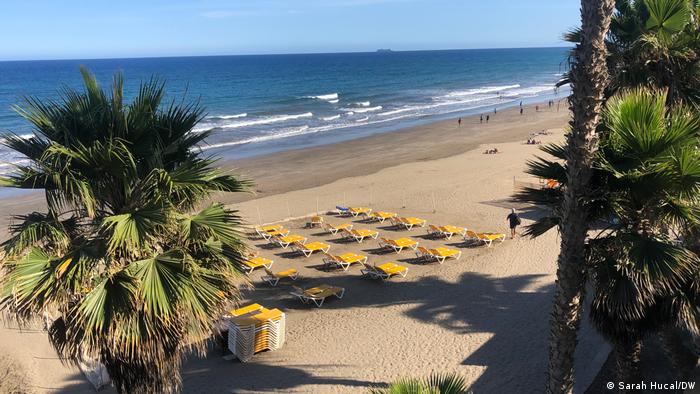 The beach of Playa del Inglés in the south of Gran Canaria, which is popular with tourists, is empty

While traveling without the crowds can be a tourist dream, it is a nightmare for many who work in the tourism industry. Unemployment in the Canary Islands rose to 25 percent by the end of 2020, making it the highest in Spain. Around 40 percent of the Canary Islands work in the tourism sector, but many have been laid off or have had to rely on little government support.

"It's the worst Easter week in recent years," told me Tom Smulders, President of the Association of Tourist Accommodation in Las Palmas, Gran Canaria. Only 30 percent of the hotels on the island are open and were only 50 percent occupied during the actual high season. 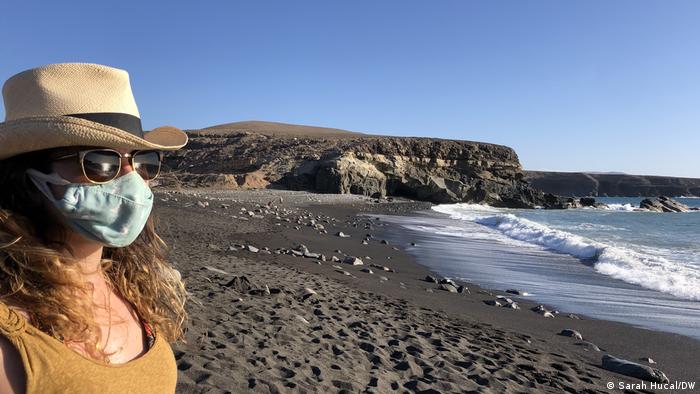 But the islands have found a way to help their hotels survive the pandemic. For example, at the end of 2020 some managed to keep their staff employed by taking in migrants who had come illegally from Africa across the sea and who were initially housed in tent camps by the authorities. The hoteliers received money from the government for their support.

Other employees like Kitti Kovacs, who has been working on Fuerteventura for over three years, changed jobs during the pandemic. She is now selling boat trips to Lobos Island, a popular day trip destination from Corralejo, for a tour operator. Before that, she was a receptionist at a hotel, but with the unpredictable hotel closings, selling tickets offered more security as locals also frequent the tour. 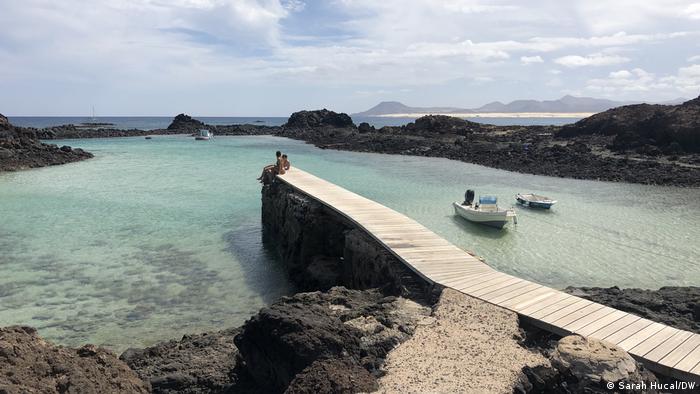 Before the pandemic, you had to sign up to visit Lobos Island because of the crowds. Those days are over

However, Kitti Kovacs is observing a positive development. "The digital nomads save us." The Canarian government also hopes that these long-term guests will compensate for the losses in tourism. Co-working spaces have already been opened on Fuerteventura and some hotels have started to offer heavily discounted prices for long stays.

To visit our next island, La Palma, we had to do another antigen or PCR test. Fortunately, it was relatively easy to get this at the airport. In the next few days we hiked on almost empty trekking routes through volcanic landscapes and forests. In the charming town of El Remo on the beach we ate in one of the typical fish restaurants. Our waiter cleaned chairs and tables thoroughly and sprayed them with disinfectant. This high level of care and attention to hygiene struck me as positive during our entire trip. 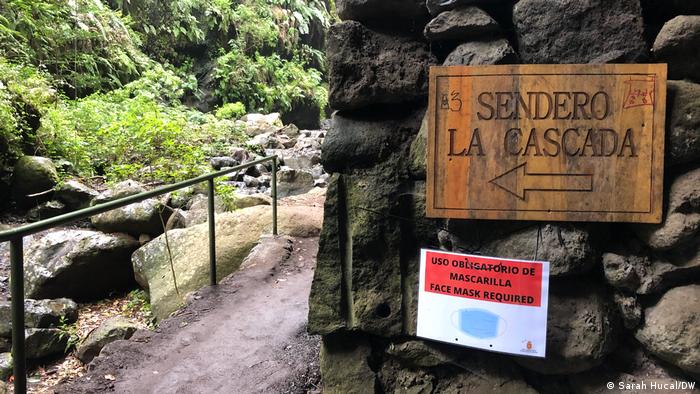 Our last stop was the island of Gran Canaria. The places in the south, Playa del Inglés and Maspalomas, which are otherwise so popular with package tourists, looked downright eerie without the crowds - like a relic from another time. Restaurants and cafes that advertised cocktails at rock bottom prices were almost - if not completely - empty.

At the airport I did another antigen test and was relieved that it was negative - not only because I can do without the virus, but also because 14 days of quarantine would have cost me a lot of money.

So we returned refreshed and relaxed to Berlin, which fortunately was not gray, but sunny. I used the five days of quarantine to review the trip. I haven't regretted it: Despite the many Corona measures, I was able to relax and enjoy my vacation trip.

Note: The Foreign Office continues to refrain from "necessary tourist trips" to the Canary Islands. If you fly back to Germany by plane, you must show a negative Covid-19 test result before starting your journey and then go into quarantine at home.