At what age should you throw curveballs

Pokémon Go isn't the problem. It is you. [Comment]

At this point I will spare you an introduction that tells you how crazy Pokémon Go is going through the roof. That's why it goes straight to the nitty-gritty: Pokémon Go reveals how incapable we humans are to keep up with the speed of technical progress. Especially us here in Germany, which really annoys me as a millennial. A comment.

I'm not even talking directly about Pokémon Go, but it shows so wonderfully how big the gap is between those who had to adapt this Internet and those who, like me, grew up with it.

The old world was overrun

The old world has been overrun with Pokémon Go. Overrun in the truest sense of the word, because since the release you can see groups of people sitting next to each other, bent over their smartphones, and just playing Pokémon Go. Until nobody pushes a lock module at the Pokestop. Then it's time to move on.

The Cologne Mediapark is currently a great place to go for all Pokémon Go players. Every now and then someone is joking and shouts that a Turtok is nearby. Some jump up and run because they haven't seen through the troll. It could be like in Central Park (see video). For everyone else, it means throwing curveballs, collecting stardust, Charmander, Taubsi or Aquana poweruppen.

If you understand little of what I wrote up there, then that's no problem at all. Pokémon Go is mostly played by people in their twenties like me, who grew up with the first Pokémon versions. Then there are younger and older people who also play it in order to understand it. That's great! But you can also find Pokémon Go shit because of the lack of game depth, the graphics, the walking around or just because of Pikachu, that's your right.

What is not so great, however, is this collective defensive attitude of numerous people, companies and institutions who completely oppose the technical progress that Pokémon Go brings with it. The following example sums it up quite well: 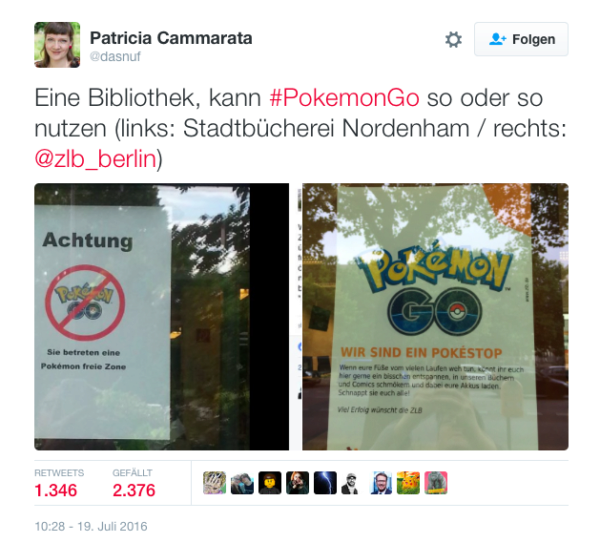 You can use the hype. Or defend yourself against it.

This anti-attitude is terrible. Why do you exclude other people directly instead of taking the opportunity to win over people? Why do you resist something new?

This is exactly how I read the fear here and there that, thanks to Pokémon Go, people from socially disadvantaged areas would suddenly be out and about in parts of the city where only quinoa bird feed hipsters like me live and this would increase crime. What a bullshit. Thanks to Pokémon Go, I've met so many people of different origins, religions, etc. in the last few days that I wouldn't have come into contact with without the game.

In addition to the aspect, privacy advocates are suddenly crying and want to warn Niantic, the company behind Pokémon Go. Because, among other things, it picks up the geodata. SAY WHAT? Are you kidding me? That's what the game is about. The main thing is to raise the German index finger and say "NO, BUT IT DOESN'T!" call. But then collect the Payback points at the supermarket checkout, huh?

Your fear ruins everything

Seriously. Something new is coming and half of our society is pissing around right away. A large part of them did not grow up with the internet and thus simply block progress in this country. I'm 25 and this whole anti-attitude towards new things only annoys me. It feels like we're developing more and more into an Internet developing country, just out of fear.

Politics could change it. But the gentlemen in office are just too old in my opinion and don't understand anything about all the stuff that goes on in America, China & Co. A Zuckerberg or Musk would never have been successful in Germany these days, because there would always have been some idiot who said NO.

It frustrates me because I think Germany is really great and I really enjoy living here. Nevertheless, as a digital native, to throw a buzzword into the room, I feel less and less comfortable in Germany and am often speechless about the technical incompetence of the older generation.

Give up or fight against it?

But I hate nothing more than admitting myself to a problem. What could the solution look like? One of them would certainly be to wait until the Golf generation retires and people who are not afraid of technical developments finally take over the helm. But until that happens, I'll be an old man myself. I dont want that.

Register now for our weekly BT compact newsletter. As a thank you we give you ours LinkedIn guide.

Should we digital natives start a movement for more digital progress? Well, some parties have already tried that without success. I don't know at the moment and am open to suggestions.

I only know one thing: Pokémon Go is a wonderful example of how much technological progress can connect people and advance them together. That is good and why should one stand against something good? Dear fearful rabbits, have more courage and you will see that progress does not hurt. On the contrary, if used correctly, it can actually make your life better.

Pokemon Go isn't the problem. It is you.