Why do Central Asians have Russian names

After the attack that hit Saint Petersburg on April 3, many Central Asian migrant workers in Russia are under general suspicion. The author and journalist Elisaveta Alexandrowa-Sorina wrote an appeal for more tolerance. The Russian original of the article appeared on mk.ru and was adopted on the Kyrgyz news platform Yntymak.kg.

To date, no terrorist organization has claimed responsibility for the terrorist attack in Saint Petersburg. The perpetrators are systematically searched for among migrants. In the eyes of society, they are considered guilty as long as they have not proven otherwise. Alleged perpetrators were found prematurely on the day after the attack.

The first "terrorist" the media discovered was a bearded man in black clothes. Immediately one could read everything possible about his origin. But then he suddenly appeared to the police himself and the suspicion turned out to be unfounded. What is particularly interesting is what happened afterwards: At first he could not fly to Ufa because other passengers did not want him on board. Then he learned that he had lost his job because of a motion by the regional investigation committee.

Read also at Novastan: Four questions about the attack in Saint Petersburg

A student from Kazakhstan, who himself died in the attack, was then suspected. The suspicion was also refuted, but in the meantime hundreds of articles about the Kazakh “terrorist” had already appeared. The message is clear: migrant means terrorist.

Finally the third suicide bomber appeared. All that was known about Akbarschon Jalilov was that he was 22 years old, was a Russian citizen, originally from Kyrgyzstan and had worked as a cook and car mechanic. In addition, rumors, gossip and speculation increased.

Jalilov was publicly condemned and found guilty without any investigation. According to the principle of presumption of innocence, the defendant must be presumed innocent until proven guilty in a public legal process. Jalilov was quickly rushed after his death because he looks Asian and fits well into the image of a potential terrorist.

It didn't matter that he was a Russian citizen. In the social consciousness people from Central Asia are always only migrants (but Gérard Depardieu belongs to us).

Every broken country constantly needs a scapegoat to blame all problems on. Today our fellow citizens are exposed to a xenophobic mood like never before. There are external enemies: Ukrainians or Americans, who can be blamed for global failures. And there are internal enemies, namely migrants, who are responsible for the high crime rate, the low wages, the high prices, the bad weather and the unhappy private life.

Most of the murders are committed by local citizens. Mostly in the household, after drinking, disputes and knife fights. In Tajikistan, Kyrgyzstan and Uzbekistan, however, the murder rate is two to three times lower. And migrants are responsible for less than 5% of crimes in Russia.

Read also at Novastan: On the run - Kyrgyz guest workers in Russia

But the resident Russians are outraged by the large number of migrant children in schools. They want these children to integrate and become Russified, but without going to Russian schools, kindergartens or even playgrounds. Children whose parents are not registered in Russia are denied education. In fact, the educational situation in Russia is catastrophic: The area accounts for 3.8% (2012) of the budget, which puts Russia somewhere between Sierra Leone and Tajikistan worldwide. It's strange to blame the illegal migrants for this because they are not involved in the housekeeping. 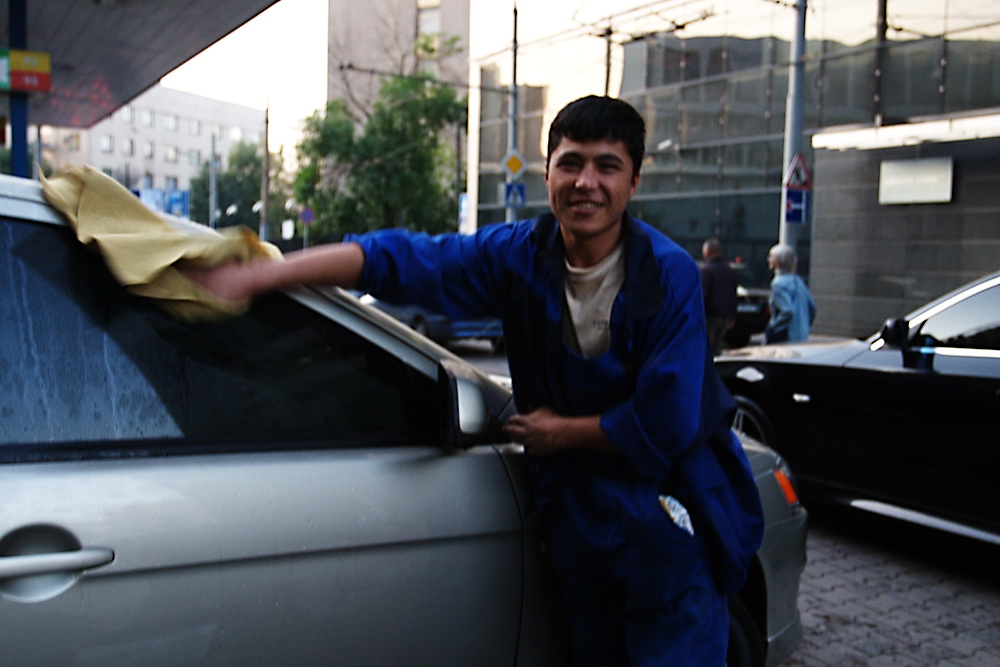 Many Russians believe that migrants should not be treated in their hospitals "at the expense of the taxpayers". They are not bothered by stories like that of a woman from Uzbekistan who gave birth to her child in front of the entrance to a maternity ward because she was not allowed in. Or the story of a heart attack sufferer from Central Asia who was thrown out of the hospital so that - God testifies - he would not die there.

In 1990 there were 12,800 hospitals and other medical facilities in the Russian Soviet Republic; today there are only 5,400. During the same period, the number of beds in maternity wards fell from 122,700 to 69,400. The anger is directed against the migrants, who mostly only ask for first medical help or simple operations.

I know a family from Tajikistan who work in Saint Petersburg. Akmal works at a vegetable market, Ferusa as a hairdresser. They have three small children and live in a rented apartment in a new building in Kuptschino. They don't let their children play at home so as not to annoy the neighbors. The children in the neighborhood can stomp and scream loudly.

Read also at Novastan: The Tajiks, lepers in Russia

The older son is in first grade. His Russian is excellent and he can speak without an accent, but the teacher and the other children call him "the stupid Tajik". To get rid of the offensive nickname, he spends all of his time behind books and is among the best in his class. Because of the constant drumming and bullying, he has a severe headache, whereas the doctor has prescribed him Tebletten.

He can recite poems by Russian poets that you only learn in higher grades, but the teacher does not let him perform with the other children at school parties. The father keeps giving the teacher fruit cans. She is happy to accept them, but she does not change her behavior towards the "stupid Tajiks".

Ferusa wears a headscarf, Akmal a beard and a Tajik hat. You are used to the suspicious looks. They want to keep their traditions, but also to be like everyone else. To do this, they have to be better than everyone else. Her two-year-old daughter, who can barely walk, is already trimmed: she knows almost all of the country's capitals. Like any other two-year-old child, she has no idea about countries or capitals. In return, their parents can show their little daughter to all surprised guests and prove that they are not “stupid Tajiks”.

Akmal and Ferusa are afraid of being outside more often than necessary. When they go to work, they take small alleys so as not to catch anyone's eye. They haven't done anything wrong, but they know how quickly they can become scapegoats. At the meeting of their diaspora, they were gently advised not to be conspicuous, even if everything was in order with their documents.

The street sweeper and his son, who clean our street and the floor at the entrance, live in the basement next to the garbage chute. Hairdressers in a hairdressing salon, which incidentally belongs to one of her compatriots, live in a garage. In August last year, 14 migrants from Kyrgyzstan died in a fire in a printing plant. They choked in their sleep. The victims stayed overnight at their place of work.

In an “elite district” in Moscow, where apartments cost hundreds of millions, Asians are nesting in the basement. And you can be happy if no one drives you from there. These are all typical stories of migrant workers in Moscow. We are frightened by the frightened people who are mistaken for talking tools here. But rather, they are terrified of us themselves.

After the terrorist attacks, migrants are increasingly being watched. Not just from police officers, but also from concerned citizens. They are scared and start hating. The story of a Petersburg resident who burned an entire village in search of “mujahideen” shortly after the attack is perhaps just the beginning of a great wave of migrant phobia.

History knows many examples in which we have let out on national minorities. Exactly 100 years ago there was mass hysteria in Petrograd (former name of Saint Petersburg, editor's note) because of a conspiracy by Caucasians.

It all started when the neighbors of a Chechen man who couldn't speak Russian reported him to the police. He seemed suspicious to them because he got up early in the morning and went somewhere. Policemen came to this man and the gossip press wrote that the house search had found a bomb, a machine gun and many cartridges. Nobody will ever find out whether it was true. All that is known is the sad fate of this Chechen and many other Caucasians who came to the angry crowd at the time.

Just as sad as the fate of the migrants, who today come before the crowd in front of the gun.

Translated from the Russian by Liliya Gubaschewa