Be it a work of art, nature or the face of a person - something beautiful instinctively triggers a sense of well-being in us. But why? Spanish researchers investigated this question and found that our brain has a kind of two-stage beauty sensor. A first network of brain areas starts when we look at something and classifies what we see as aesthetic or not in a split second. The actual “aha” moment - the conscious realization “that is beautiful” - only follows afterwards: When a second network begins to analyze more precisely why what is seen is beautiful, according to the researchers in the specialist magazine “Proceedings of the National Academy of Sciences ".

Beauty is in the eye of the beholder - this well-known saying should actually be worded differently. Because whether we find something beautiful or not is not decided in the organ of vision, but in the brain. A few years ago, neuroscientists began to research exactly where this instinctive reaction to beautiful things manifests itself in our thinking organ. "It quickly became clear that many different brain regions are involved in the aesthetic assessment," report Camilo Cela-Conde from the University of the Balearic Islands in Palma de Mallorca and his colleagues. In addition to the circuits responsible for rewards and feelings, the areas in which what is perceived is processed and decisions are made also play an important role.

How these different regions of the brain work together has been unclear until now. Studies have shown, however, that even babies react to certain stimuli that are perceived as beautiful, for example by looking at attractive faces for longer. This suggests that beautiful things trigger positive feelings even before we have consciously categorized what we have seen as beautiful, as the researchers report. They therefore put forward the thesis that there must be two networks in the brain that shape our aesthetic response - one for the instinctive perception of a stimulus as beautiful or not and a second that then analyzes and evaluates more precisely what makes the stimulus so beautiful .

To test this hypothesis, Cela-Conde and his colleagues recorded the network activity in the brain of 24 test subjects, while they were shown beautiful or non-beautiful objects in rapid, irregular alternation. To do this, they use what is known as magnetic encephalography (MEG), a process that registers the tiny magnetic changes that result from the firing of nerve cells in the brain. This makes it possible to analyze which areas are active at the same time and in unison - and thus form a functional network. 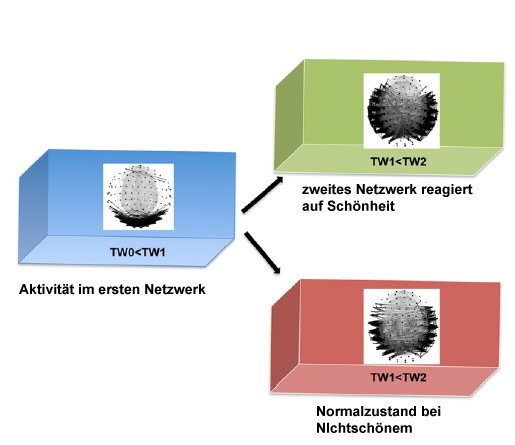 Functional networking when looking at the beautiful and the not-beautiful © Cela-Conde et al. / PNAS

First a feeling, then "Aha!"

The result: In the first 750 milliseconds after seeing the object, areas in the back of the head in particular became active - and this was true for both beautiful and ugly objects, as the researchers report. This indicates that in this phase a first network starts up that generally processes the visual stimulus. There was already a difference here, too: if the test subjects saw a less beautiful object, this occipital network was also linked to an area behind the forehead - the orbitofrontal cortex responsible for evaluating stimuli and errors.

One second after perceiving the object, the brain activity changed - but only when the test subjects saw a beautiful object in front of them. Only then did another network start, in which areas on the left and front side of the head became active. As the researchers explain, they analyze why we find what we see beautiful - whether shape, color, movement or the like - and how beautiful it is compared to other things. “That is also the point in time when we feel the aha! Moment - we become aware that we are currently seeing something beautiful,” say Cela-Conde and his colleagues.

The puzzle is far from being completely solved

According to the researchers, their results show that the response to beauty actually takes place in two steps and is coordinated by two different functional networks in the brain. But they also emphasize that this is only just scratching the surface of the complex processes that shape our response to beautiful things.

"Many individual factors, from personal experiences to the character, health and gender of the viewer, but also cultural and historical influences contribute to whether and how we feel this aha! Moment," they explain. The riddle of why humans have an instinctive sense of beauty and how exactly they function is therefore still far from being solved. (Proceedings of the National Academy of Sciences (PNAS), 2013; doi: 10.1073 / pnas.1302855110)