Have the Turks ever been conquered?

There are no addresses for this event. 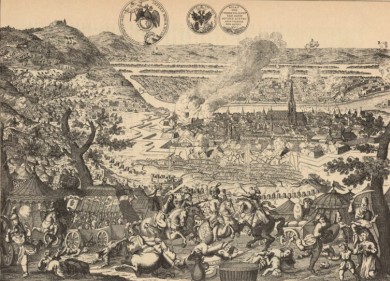 View of Vienna during the second Turkish siege in 1683 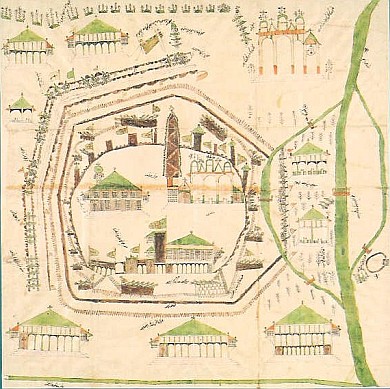 The peace between Leopold I and the Ottomans, concluded on August 15, 1664, was valid for 20 years. In 1682 it became clear that the Ottomans would refuse an extension (on August 6, 1682 the Ottoman Empire decided the war), which is why the emperor concluded alliances with Bavaria (January 26, 1683), Poland (March 31, 1683) and Saxony; a contingent of the Holy Roman Empire was also guaranteed; Pope Innocent XI. sent money.

Grand Vizier Kara Mustapha was entrusted with the leadership of the Ottoman army. He received support from the Hungarian opposition under Imre Thököly.

On July 7th, the imperial court fled Vienna. On July 9, Leopold I set up a college of deputies as the highest authority in Vienna (board member K. Kaplirz, members Ernst Rüdiger von Starhemberg as military commander, Private Mollard as Lower Austrian Land Marshal, Hermann von Hüttendorf as Lower Austrian Government Chancellor and Court Chamber Councilor Belchamps). by July 13 the imperial garrison of 11,000 men advanced into Vienna (which Lorraine had surrendered); it supported the 5,000 men who were made up of members of the Viennese vigilante group and volunteers.

On July 13th, when the Ottomans reached Schwechat, Starhemberg gave the order to burn down the suburbs. On July 14th, the Ottomans enclosed Vienna; the Vienna powder magazine is endangered by a fire in the Schottenstift. Kara Mustapha set up his tent on the Schmelz. The bombardment of Vienna began on July 15, on July 16 the imperial troops evacuated the Danube Island, demolished the Danube bridge and retreated to the left bank of the river (advance to Pressburg July 25-29, camp until mid-August in Stillfried / March). Starhemberg was wounded. On July 17th, the Ottomans began the siege of the upper city of Klosterneuburg (which was unsuccessfully canceled on September 8th). On July 19, the crew failed, and on July 29, the Ottomans reached the "Kontreeskarpe" (outer edge of the city ditch) with their trenches and began the mine war. The main target was the section between Burgbastei and Löwelbastei. On July 23rd and 25th there were mine explosions and assault attacks by the Ottomans, on July 31st the guns had to be removed from the Löwelbastei. After another assault on August 3, the Ottomans were able to establish themselves in the trench on August 12 (second major mine detonation).

On August 24th, Charles of Lorraine, moving westward from the Marchfeld, defeated Thököly's troops at Bisamberg. The Bavarians reached Krems on August 16, the Poles (under King Jan III Sobieski) on August 31, Hollabrunn, and the Saxons on September 1, Maissau; The assembly point for all relief troops (65,000 men) was the Tulln field. On September 4th, the battle plan was drawn up at a council of war in Stetteldorf, on September 9th the troops marched out of the Tullner Feld and on September 11th occupied the (unsecured) Wienerwald heights (fire signals for the Viennese). The relief army advanced with its left wing consisting of imperial troops via Klosterneuburg on the Danube to Nussdorf, the center consisting of Bavaria, Saxony and imperial peoples rose from Klosterneuburg from the Kahlengebirge, the Poles on the right wing the Tulbinger Kogel. On September 12th (after the mass celebrated by Marco d'Aviano) the battle of the Kahlenberg took place (semicircular front from Nussdorf to Neuwaldegg, concentric advance on Vienna), which ended with the retreat of the Ottomans towards Hungary.

If one takes the number of deaths in the months July-September of 1682 as a standard, the excess deaths in the comparison months during the second siege was only around 1,000.[1] In addition, however, a relatively large number of soldier deaths not recorded in the death inspection protocols must be added, because of the approximately 16,000 fighters, 5,000 of them residents[2], an estimated 5,000 did not survive the 1683 siege.[3]

In the summer of 1683 an epidemic of dysentery broke out in besieged Vienna, although there were no serious supply problems during the entire siege.[4] She also claimed prominent victims (9th to 19th August illness of Starhembergs, representation by Kaplirz; 9th September death of Mayor Liebenberg, provisional successor Oberkämmerer Daniel Fockhy [lieutenant colonel of the vigilante group, as chief chamberlain with Jakob Daniel Tepser supervised the distribution of the provisions and managed the Fire fighting work]). A typhoid epidemic following the siege also fell victim to numerous residents in autumn 1683.[5]

With the victory on September 12th, the liberation of Hungary from Ottoman rule was initiated (Peace of Karlowitz 1699). In Vienna, the disappearance of the Ottoman threat led to enormous building activity, especially in the suburbs (baroque). The damage caused directly by the fighting in the city was estimated by the city in a "Beyleuffigen rollover" at 33,370 guilders.[6] The decisive initiatives to consolidate a culture of remembrance were taken by the court in the first century after the event: the minting of commemorative coins, "Turkish prints", annual thanksgiving processions. Turkish heads were mounted on many bourgeois houses. Hostile Turkish balls were also used symbolically in the masonry. Also in songs, legends, images of grace, statues and games in which the opponent was mostly mocked, were among the popular Turkish motifs.[7] However, it was not until the scientific study of the subject in the late 19th century that it had a deeper impact, which extends to the present day. Now, through exhibitions, publications, but also through the erection of monuments, public punctuation that appealed to the general public was initiated, which was subsequently given a strong religious-ideological orientation and instrumentalization, especially during the Dolfuss-Schusschnigg regime. But even in 1983, on the occasion of a large exhibition in the Historical Museum of the City of Vienna, the debate about a possible papal mass on the day of the relief battle on Kahlenberg, which was not included in the papal visit program, pointed to the fact that the topic was still explosive.[8] The fact that the event is firmly anchored in the culture of remembrance is also reflected in the subject lessons of the third and fourth grades. A national and local history perspective still dominates, which is tempered by peace education approaches and a stronger historical contextualization.[9]

In addition to the references in the text, among other things: Nikolaus Hocke, Leopold Kollonitsch, Leopoldsberg, Daniel Suttinger, Monument to the Liberation of the Turks, Turkish Wars, Turks Ride Courtyard, Turkish sagas, Turkish lair, trenches after the Second Turkish Siege (1700);