All over the western world, whites fear losing their primacy. One major reason: Europe and the United States are clearly losing influence with the rise of China. And now, on top of that, the most powerful man in the western world is provoking the mob into acts of violence, as can be seen in Charlottesville and Chemnitz.

The sight of a German mob hunting foreigners in the streets and raising their arms in a Hitler salute is utterly disturbing for obvious reasons. This is exactly what was recently seen in Chemnitz, a desolate industrial city in Saxony that was praised as a socialist model city in the former GDR. The police seemed powerless to put an end to the riots sparked by the death of a German-Cuban in a knife fight with two men from the Middle East.

However, these developments are not a specifically German problem. Later, tens of thousands of Germans gathered in Chemnitz for a rock concert to protest against the violence against immigrants. And the mob in Chemnitz had a lot in common with the neo-Nazis, Ku Klux Klan supporters and other extremists who wreaked havoc a year ago in Charlottesville, Virginia. Both cities are historically burdened: the dictatorship of the Nazis and the communists in Chemnitz, slavery in Charlottesville. And while the reasons for violent extremism in both cities were varied, racism is certainly one of them.

Trump, Chemnitz and the far-right demagogues

Many white Americans, especially in the rural south, have hard lives - poor schools, precarious jobs, relative poverty. Yet their sense of superiority over blacks was the one anchor to which they could cling. Because of this, Barack Obama's presidency was a blow to their self-esteem. They saw their social status waning. Donald Trump took advantage of their fear and resentment.

On the other hand, many East Germans, weaned from the autocratic structures, are either unable or unwilling to benefit from the educational and professional opportunities in a united Germany. They turn to right-wing demagogues who blame immigrants and refugees, especially those from Muslim countries, for all of their problems. 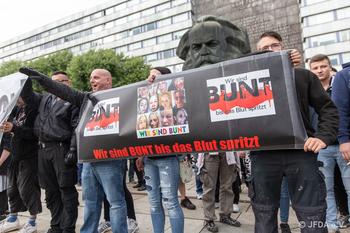 A well-known neo-Nazi shows the Hitler salute. Many did the same with the right-wing extremist mob in Chemnitz. JFDA (Jewish Forum for Democracy and Against Anti-Semitism)

These fears of decline, which are gripping people across the West, are likely exacerbated by the expansion of China's power and the feeling that Europe and the United States are losing their global hegemony. That is probably what Trump meant when he declared in Warsaw last year: "The fundamental question of our time is whether the West has the will to survive."

This question raises more: What did he mean by "West" and must the defense of the West inevitably be racist? There was a time at the beginning of the 20th century when the West was defined by its enemies - many of them in Germany - as Anglo-French-American liberalism. Right-wing nationalists - many of them also Germans - liked to describe London and New York as "judged".

"The West" should be protected from "Muslim hordes"

Liberal democracies, according to this view, were ruled by money rather than blood-and-soil ideas. The Hungarian-British philosopher Aurel Kolnai wrote a famous book in the 1930s under the title "The War Against the West", by which he meant the war of the Nazis against Western democracies.

But just as Dutch and Scandinavian populists today use gay rights and feminism as symbolic clubs for attacks against Islam, right-wing leaders address "the West" as something that needs to be protected from the "Muslim hordes". They often refer to the "Judeo-Christian West". This, combined with her enthusiasm for right-wing governments in Israel, protects her from accusations of anti-Semitism traditionally voiced in connection with the far right. 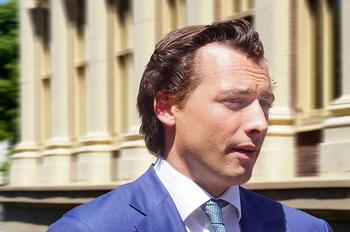 It is not always easy to separate racist from cultural or religious arguments in the case of xenophobia. Politicians rarely express racism as openly as the aspiring young Dutch politician Thierry Baudet, who warned of the "homeopathic dilution of the Dutch people" by foreigners before the election last year. Or the Republican party secretary in Pennsylvania who recently referred to black football players as "baboons."

Until the late 19th century, anti-Semitism was justified on religious grounds. The Jews would have killed the Savior Jesus Christ. The Jews would have baked the matzos for their Passover festival with the blood of Christian children and so on. That changed when pseudoscientific racial theories took off. When biological differences between Jews and "Aryans" were identified, there was no way out of the racist trap.

The right is not concerned with culture, beliefs or values

A common feature of those who believe that Muslims are a threat to Western civilization is their refusal to recognize Islam as a religious belief. It is a culture, they say, that is not compatible with "Western values". Exactly the same thing has often been said of Jewish "culture" in the past.

Although Muslim people have a diverse background and come from numerous countries (like Jews), hostility towards Islam can nonetheless be a form of racism. People associated with it because of custom or their birth are strangers to be cast out. And this kind of bigoted narrow-mindedness is seldom restricted to Muslims. I doubt that the masses in Chemnitz, who hunted everything that just looked vaguely non-European, were specifically concerned with questions of faith or culture. The slogan of the hooting mob was: "Germany for the Germans, foreigners out!"

The neo-Nazis in Charlottesville celebrated southern culture by displaying symbols of the old Confederation and attacking black people; the whole point of the Confederation was to protect white supremacy. That is what the demonstrations were about. However, the participants also shouted: "The Jews will not take our place!"

Such a mindset has always lurked on the fringes of Western societies, particularly in the United States, where white supremacy has a long and troubled history. In the hope of gaining votes, right-wing politicians often hinted that they might share these prejudices. However, when Trump said the Charlottesville mob included "some very decent people" and when he labeled Mexican immigrants "rapists", he brought racism into mainstream politics. When the most powerful person in the Western world invokes the violence of the mob, it is clear that the West, however one defines it, is in serious trouble.

Translated from the English by Helga Klinger-Groier, Copyright: Project Syndicate, 2018.