MS is worth it in nursing

After completing his vocational qualification, Roman (25) completed an apprenticeship as a nurse, worked in his profession for nine months and then decided to study the bachelor's degree in nursing at the Diakonie University of Applied Sciences (FHdD) in Bielefeld. “What's that supposed to do?” He was often asked, but Roman has plenty of good reasons!

Here you can see a film about the nursing courses! 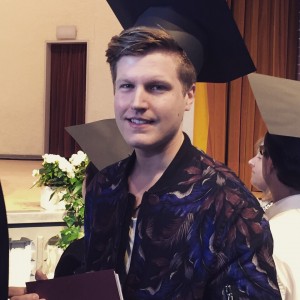 Roman, why did you decide to continue studying after completing your training?

Somehow I wanted more! I was good at learning mode and I had known for a long time that I wanted to study something on the subject of health care. I just didn't know what before. The bachelor's degree in nursing at the FHdD offered itself because it was an offer from the same provider, which my employer, Ev. Bielefeld Hospital belongs.

Your studies were part-time - how did that work?

I'm a well organized person, that wasn't a problem. In addition to the 3-year course, I even worked 100 percent! At first I tried to reduce it to 85 percent, but after two months my employer asked me to reverse it. I then managed my time well and voluntarily put on night shifts. You can read a text there and have time to study, especially during the day.

How did your colleagues find it?

They thought it was good that I volunteered to do night shifts, but the fact that I was the only one of 70 colleagues out of 70 who went to university apart from my boss definitely caused competition. It wasn't that easy. I just didn't mention it anymore. And then I was offered a new position here in the house while I was still studying. 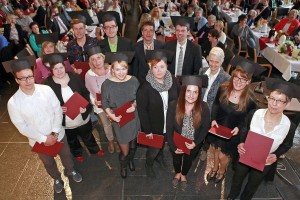 The 14 graduates of the first year Bachelor of Nursing at the FHdD in Bielefeld.

What kind of job is that?

With a bachelor's degree in nursing, you can, for example, do ward management or nursing development. I was previously in the intensive care unit and am now responsible for the operational implementation and parts of the strategy development of a nursing project that deals with the continued care of patients after their discharge and relieving relatives. For example, I advise relatives on care levels. And if they don't know how to get their father out of bed, I even drive to their home and show them and practice with them. I am responsible for the entire 390-bed house and that is exactly my thing: a little care is also included, but also a lot of personal responsibility and I can organize my assignments flexibly.

Do you have any other career plans?

Yes, I am still doing my master's degree in health care management, and then I would like to do my doctorate as well. I don't have a family yet and can concentrate on it.

And do you have any tips for nurses who are contemplating studying?

I often hear the argument: "Why should I study, it costs money and after that there are no better jobs for me and I also don't earn more!" The argument does not count. The jobs are being created. And if you keep getting involved and show your motivation, the employer will come to you by itself! It's worth it, not only professionally but also personally.

Together with Roman, thirteen other students were the first year to complete their Bachelor of Nursing at the FHdD in April 2015. If you are also interested: Information is available here and here!